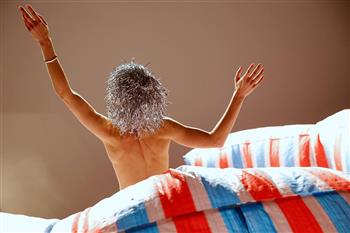 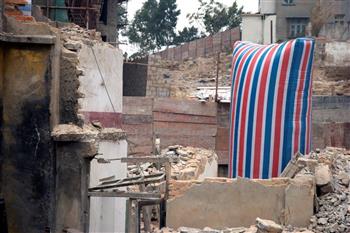 “… we are just links between a heritage we took without knowing why it is so precious to protect and another heritage we will give to the new comer who also doesn’t know the meaning of the burden… just an instinct…to ignore the death, we create meanings to repeat in generations, so after our death, at least, the life style whose part we were, keeps repeating itself…and now just before extinction with my race, I realise, it was nothing…the heritage… meaningless….now there is nobody to listen the story, and so…the story is meaningless…”  Dylan Dog (comic book by Tiziano Sclavi).
After their debut Countdown (2012) and the performance extracted from that, Yowsah Yowsah Yowsah (2014), Copycats put their claws into a sequel. Holy Holy Holy is the second part of a trilogy. The confessions game show Countdown transforms into a mantra-striptease ‘I believe’. Together with artist Kaleb de Groot the Copycats will build objects, apocalypses, inflatable manifestos on stage and cosmic hideouts from imagination. The group steals material and movements from movies, manga, soundtracks and dubs from each other’s lives. In their performances Copycats play on the border between reality and fiction and create a structure of a game, the rules of which are shared  with the audience. Within this structure Copycats play shamelessly, sometimes even foul and abuses sentiment.
Concept/performers Ilyas Odman/Christina Flick/Kimmy Ligtvoet/ Melih Gencboyaci   Installation/design Kaleb de Groot   Sound Ata Guner   Dramaturgy Erica Smits   Coach Loes van der Pligt   Technic Dave Staring - Production Productiehuis Rotterdam, Maaike Gouwenberg   Support The Performing Arts Fund, The Netherlands © copyright Roosje Klap & Kaleb de Groot - photographer Roosje Klap